I’ve had my horse trailer for several years and used it very little. I almost always ride with a neighbor who has a nicer rig and who likes to drive, so my rig is mostly parked. Recently, though, I’ve started taking some lessons and that means I trailer my horse to the lesson place, and the trailer has come out of retirement.

That means the trailer has needed some assessment and attention that, really, should be done on a regular basis whether or not it is being used. You can never tell when you will need it for an emergency, be it a trip to the veterinary hospital or an evacuation, so it should be ready for action at all times.

Some of the basics include pulling up the mats and checking the floors, making sure the lights and brakes are in working order (and the brakes are adjusted properly), checking the emergency brake battery, and of course, checking the tires.

Tires are a particular challenge for me because, honestly, I’ve never been good at using a tire gauge. The minute the thing starts hissing at me, I just want to pull it off the stem. OK, I’m a wuss. But I did manage to ignore the hissing and actually get it seated properly to get an accurate reading, which was way too low. Fortunately, I have one of those portable battery chargers/air compressors and was able to get the tires, (including the spare–don’t forget the spare!) properly inflated. Figuring out proper inflation was a little tricky. This is printed on the sidewall of the tires, and I was looking for a “PSI” number, but my tires happen to have the inflation printed in “KPa” and not “PSI” so it took a while to figure out what number I was looking for. Then I had to go online to figure out the conversion to PSI. By the way, if you divide your “KPa” number by 7, you get the approximate PSI. In my case, it was 60 PSI.

The tires on the trailer are the original tires but have very few miles on them so the tread is great. A bigger concern is the fact that the trailer sits still so much, and sun exposure tends to cause sidewall cracks. There are a few minor cracks and I’ll be looking into replacing the tires soon. I also purchased some tire covers online. These are pretty inexpensive (I think I paid about $35 to cover all the tires) and you can buy covers to cover the tandem wheels on the trailer. Be sure to check the size. I got the “Small” size which fits my 15″ rims. Of course, check the specs on the particular covers you are buying. The covers should protect the tires from sun exposure and extend their life. Remember to take them off before moving the trailer! Yes, that sounds obvious, but still…And if you think that the sidewalls won’t blow out from sitting too much, think again. A neighbor borrowed my little-used pickup and the sidewall blew out on the freeway on a rather high bridge.

In the event of a flat, there is tool that will make your life a lot easier. This is a drive-on tool that elevates the good tire on the same side of the trailer so that the flat can be removed, eliminating the need for a jack. The brand name of the one I bought is Trailer-Aid, which seems to be the industry leader. One tip I learned a long time ago for changing tires is to loosen the lug nuts BEFORE raising the tire off the ground. It can eliminate a lot of tire spinning while you are trying to get those lug nuts loose! Speaking of which, make sure you have a lug nut wrench that fits your wheels, and that you know where it is and how to get to it. Smart idea to practice ahead of time.

If all this seems boring and excessive, let me share a story. While riding at a local recreation area, we encountered an acquaintance whose trailer had gotten sideswiped while leaving the parking lot. It blew out one tire completely (fortunately, that was the worst damage). She limped the rig back to the lot and there she found out how many things can go wrong. She did not have a jack. Her spare tire was flat. She couldn’t get hold of her husband.

Fortunately, my riding companion is “Miss Preparedness” and had the Trailer Aid. We helped the woman find a lug nut wrench that worked with her tires, and then we were able to remove the flat. That’s when we found out the spare was flat. Enter the park ranger, who had the portable compressor in his vehicle. We were able to inflate the spare, which thankfully held air, change the tire, and get the rig rolling again. But it took a team of people with the right equipment. (By the way, if you think the Highway Patrol is going to live up to the “To Protect and To Serve” motto and help out with this operation, you are wrong. They are not allowed to assist. Especially the seemingly 12-year-old officer who showed up for this event).

If all this has put you in the mood for shopping, here’s a pic of the tire cover and of the Trailer Aid, both purchased through Amazon. The tire cover is surprisingly easy to put on and take off. 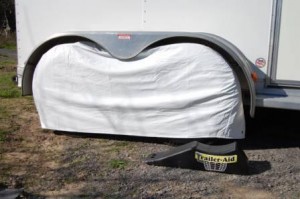 One other item I bought is a cap for the trailer plug. “Stuff” tends to get in the holes in the plug and I’ve know people who blew fuses while plugging in the trailer, usually because some bug has taken up residence inside the plug. Really slows you down, and not so good for the bug either. The cap can keep the plug dry and clean. And make the world a little safer for bugs.

Happy New Year to everyone!

A new year always seems like a new beginning. We have a fresh start to accomplish those things that we didn’t get done the year before. Problem is, we generally have the same things on those lists (and when I say “we”, I am definitely including “me”!).

“In Balance Equestrian” is intended to be a resource to enable horse owners, and particularly those who keep their horses at home, to lead a “balanced equestrian lifestyle”. Meaning that you are going to have the time and energy to enjoy your horses to the fullest. To be honest, I’ve never achieved that and my evil plan was to figure it out and share the strategy with readers. It seem like there is always something more important to do than spend time with the horses.

Stephen Covey is one of my favorite leadership coaches. His timeless work “The 7 Habits of Highly Effective People” is a great resource, and one of my favorite parts is his method of prioritizing tasks. Tasks are rated by their “Urgency” and their “Importance”.  The idea is to spend your time in the “Important” but “Not Urgent” quadrant to set yourself up for success. It’s pretty easy to define “Urgent”. Those are the things that need to be done NOW. Defining “Important” is a little harder. What’s TRULY important?

I’ve always stated that my horses are very important to me. Yet, when push comes to shove, all activity that doesn’t involve meeting their basic needs (feeding, mucking, etc) has been pushed aside to deal with work and family “emergencies”. Now really, I run a bookkeeping service and I keep stating that there is no such thing as a bookkeeping emergency. Sometimes it’s hard to convince clients of that, though, and I generally cave in to their frantic pleas to get something done right away. Which means abandoning that plan to get in a ride.

Last week the resentment level around that finally hit a peak. I haven’t ridden in over a month and there was still a boatload of work on my desk. My plan has been to schedule in riding time, usually right after lunch. The problem is, once you start in on the work and the phone calls and the e-mails, the momentum builds and taking time out for a ride just doesn’t happen. Realistically, with all the preparation (clothing changes, grooming, tacking up, warmup, ride, untacking and cleaning up, and back into street clothes), a simple ride takes around an hour and a half so that’s a big chunk of time when you are in the middle of something. So I switched things around, and the ride came first. Well, almost first. I did check e-mail and the phone, but didn’t respond to anything, just set up the priorities. That took long enough for the horses to finish their breakfast. And then I got in my ride.

Not only did I get to ride, but it actually made me more productive when I did tackle the workload. I had become so resentful of the time spent at the desk responding to “urgent” requests that I wasn’t really getting much done. The burnout had built to the point that instead of tacking a task right away, I would find a nice diversion in something completely useless (like Candy Crush Saga for instance. I will not share what level I am at). So avoiding doing the things I love and that are important to me had the backlash effect of my wasting more time than ever.

My main point is, while I was stating that my riding is important to me, I wasn’t TREATING it like it was important. If something keeps getting pushed to the back burner, it isn’t something that you have really designated as important.

I’ve been rehabbing an off-track Thoroughbred for two years now, with the intention of making him my next trail horse and maybe tackling some dressage lessons with him. In two years, while we have made some progress, he still doesn’t ride well in a trailer (probably because I have put him in the trailer and taken him for a ride maybe twice), and I have cantered him twice. One of those canters was yesterday after I finally made working with him an actual priority. If I had treated this project as being as important as I said it was, we would probably have hit the trails at least a year ago.

Stephen Covey defines “Important” as contributing to your mission and your goals. So at the start of this new year, let’s look at missions and goals and truly get our priorities straight. If horsemanship is a high priority for you, then treat it that way. It may mean saying “no” to some requests that look important (but who are they important to, and why should someone else’s priority become your priority?). My resolution this year is to set firmer boundaries, train others (and me!) to treat my time with respect, and get a lot more clear on what is really important to me.